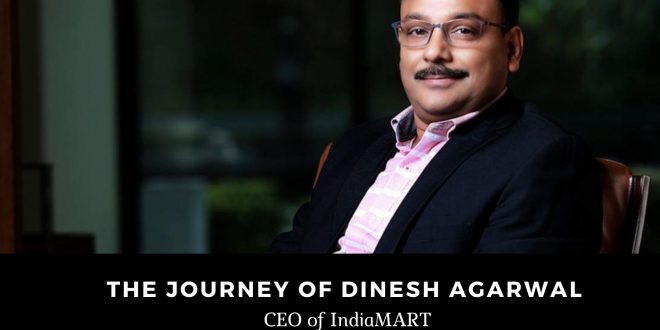 The Journey of Dinesh Agarwal | CEO of IndiaMART

Dinesh Agarwal is the founder and CEO of the oldest and biggest business-to-business (B2B) marketplace of India. His E-commerce company is known as IndiaMart. IndiaMart, a 23-year-old company, it is a very popular name in India. There are about 100 million registered buyers as well as 5.7 million suppliers. It shows nearly 63 million products.

The early life of Indian entrepreneur

He was born on 19 February 1969. His birthplace is Nanpara, Bahraich, a district of Uttar Pradesh. He is very intelligent as well as hardworking from his childhood. Dinesh Agarwal started his college study at Maharaja Agrasen Vidyalaya Inter College, Lucknow. He has a B.Tech degree in computer science and engineering from the Harcourt Butler Technological Institute, Kanpur.

Mr. Agarwal belonged to a business family. However, he was more interested in technology. The fate has its own setups. After his graduation, he tried his luck in different firms.

Dinesh firstly worked with CMC Limited after his studies. In the early development stages, he was coupled with the centralized Railway Reservation Systems Project. After that, Dinesh worked with the C-Dot (Centre for Development of Telematics). He also joined the team of Rural Automatic Exchange.

Thereafter, he went to America. He worked as a systems analyst at HCL Technologies. At HCL, he got the chance to work for some top companies of the world: Bank of America, Novell Netware, and UB Networks. HCL’s working experience inspired him to do bigger. He realized his own potential.

After returning from America, he made a website. It turns into a marketplace for exporters as well as importers. IndiaMART is the name of his venture which especially helps small and medium enterprises to expand their market. The main aim of the venture is ’’bringing in ‘ease of doing business in the country’’.

He tied the knot with a girl named Chetna. She was the choice of his parents. Mr. Agarwal has two sons, Amit and Bharat. He loves to travel and explore new cultures which helps him to absorb new information and knowledge. Dinesh Agarwal is also fond of reading. The main area of his interest is to explore technological solutions and the B2B marketplace. He loves to experiment for bringing positive changes into society.

The IndiaMart helps millions of small and middle ventures to come online and grow more. For two decades, Dinesh has transformed the business ecosystem of the country. His flourishing venture has now 100 million registered users all over the country because of his substantial innovation. Therefore, a feature like CRM attracts bigger companies to generate leads on IndiaMART.

This prolific investor has invested in many set-ups. Companies like Medical app Curofy, crowdfunding platform Wishberry, and marketing platform SilverPush, etc. work in his portfolio. He mainly focused on investing in technological companies. Hundreds of entrepreneurs get help from him.

According to the sources, he has a net worth of around US $1.1 billion in February 2021. His company has 100% profit during the lockdown. This only happened because of his strategy to provide on-demand products like sanitizers and face shields etc. Dinesh Agarwal says in an interview that if one can’t find anything on IndiaMART, he won’t get it from anywhere else. His company has nearly 107 million buyers with 6 million sellers.

He is recognized as a Young Turk by CNBC and ‘The Market Maker’ by The Economic Times. In 2020, he was given an award of the Digital Person of the year by IAMAI. Additionally, he got an award titled ‘The Best Corporate Executive’ from the NCR chamber of commerce and industry (NCCI).

Dinesh has been working as a Member of the Governing Council of Internet and Mobile Association of India (IAMAI) since 2015 till present. Mr. Agarwal gets ‘Dare to Dream’ award as an inspirational leader in the year 2018. He shares his valuable advice and experiences with the young generation through conferences and seminars.

Contribution to country and society

Dinesh Agarwal has a tremendous contribution to Indian business environs. He undertakes different initiatives to encourage technology in India. In 2018, he interpreted India’s success story in the field of e-commerce at the United Nations Conference in Geneva. He helps new as well as individual businessmen to promote their businesses and delivery. Health tech and cloud telephony are other sectors in which he invests. It has more than 45 firms of different sectors which he monitors.

Apart from it, Dinesh also works as a high-profile leader. His humanitarian efforts and works help him to emerge this profile among the public. He works with several social organizations. Olympic Gold Quest (Foundation for Promotion of Sports and Games) gets an annual amount from him just to encourage sportsmanship. Women empowerment is another sector in which he contributes. ‘Mera Sahara’ is a joint woman’s program that is sponsored by him for women’s betterment.

IndiaMART becomes the marketplace of India due to its hard work. More than 1000 big brands use this platform. He always wished to make a forever company’, now he has achieved it. Nowadays, nearly half percent of the business deals of India’s GDP are done by IndiaMART.

The Inspiration story of Dinesh Agarwal is making the biggest impact on people’s life.