S.P Hinduja is a Britsh Billionaire who is an investor & businessman. He is well-known as a shareholder and CEO of the Hinduja Group of Companies. Companies like Induslnd bank, Ashok Leyland, HGS, the untouchable gulf of oil products, and many more all belong to the Hinduja group of Companies.

S.P Hinduja was birthed on 28-Nov-1935 in Karachi Sindh, British India in a prosperous business family. Basically, he is Sindhi-Hindu. He completed his studies at Davar’s College of Commerce and R.D National College, both situated in Mumbai. They are four brothers and are also known as the “Fab Four”.

His father Parmanand Deepchand Hinduja was so dedicated to business, that his father shifted from Karachi to Mumbai, to learn the techniques of business. He puts up his international office in Iran in the year 1919. They started trading between Iran and Mumbai. They always believe in doing business global perspective. After completing S.P Hinduja studies, he joined also his father’s textile and trading business at a very early age, trading in textiles, spices, dry fruits, potatoes, and onions.

Their business takes a high when their companies bought the overseas rights to India Blockbuster Movie ‘Sangam’. They distributed and also promoted the film in the middle East Market and earned millions of dollars. Then in 1978,  they establish a finance company and headquarter in Geneva.  After 1979, they proceed to Europe because of Islamic Revolution over there and due to political uncertainty in Iran.

In the year the 1960s, Indra Gandhi has a dispute with the Shah of Iran regarding the high cost of Iranian. The Shah of Iran told to cover the cost, India has to increase their export to Iran. At this time Hinduja grab the opportunity, it was the biggest deal at that point in time, they took the Iron ore deal of Kudermukh and commissioned it for almost $10 million. At that time they also have many other trading companies like Sangam and Ashok trading, American aircraft, and many more products.

Later in the 1980s, the Hinduja group have taken a great risk in manufacturing Indian trucks and buses i.e Ashok Leyland. A while after, they took Gulf Oil international company for supplying different oil and lubricants globally. In the 1990s they become the richest businessmen in India such as Ambani, tata & Birla, as they founded banks in India and Switzerland.

In the year 1993, they established IndusInd Bank & in 1994, they initiated Induslnd Media and Communication Ltd. Finance Minister Manmohan Singh was invited to the inauguration. The bank then opened its branches in Switzerland, the UK, UAE, and India. Providing wealth and investment advisory to high-level businessmen and entrepreneurial’s.

Eventually, in 2012, gain the US firm Houghton International which was the largest metal fluid manufacturer for $1.043 billion.

Bought the new home for $58 billion and it is the most pricey home in the whole world. S.P. Hinduja was offered a by a UK university a doctorate, which he denied because he said he want it with his all three brothers. They have so many foundations that are non-profitable that is started in the memory of their father for education, quality medical facilities & other.

“We Should work to Earn and Earn to Give”

They had been on the list of the Richest people in the world Worth $14.8 billion. The Hinduja group has more than 1,50,000 people working with them.

His real name is Srichand Parmanand Hinduja.He got married to Madhu Srichand Hinduja & had 3 children 2 daughters Shanu & Vnioo and 1 Son Dharam Hinduja. But he lost his son as he suicide in a hotel room in Mauritius with fire.

S.P Hinduja and his brothers are in different parts of the world. He and Gopichand live in London & Prakash Hinduja in Monaco, & Ashok in Mumbai. They are known for their unity. All of them follow the same religion. In an interview, he told that “He always keeps on learning”.

Hinduja group has grown so much that now they are operating more than 30 companies. The family is well known for their Diwali parties, as they invited all the influential businessmen and entrepreneurs. The 4 brothers in the family share a beautiful bond that every relationship should have. The brothers lived with the age motto of:-

“Everything Belongs to everyone, and nothing belongs to anyone”.

The Success Story of S.P Hinduja makes the biggest impact on people’s life. 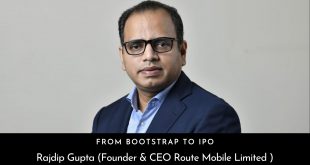 From Bootstrap to IPO – Rajdip Gupta

Rajdip Gupta is the group CEO at Route Mobile Limited and bootstrap to IPO. He …