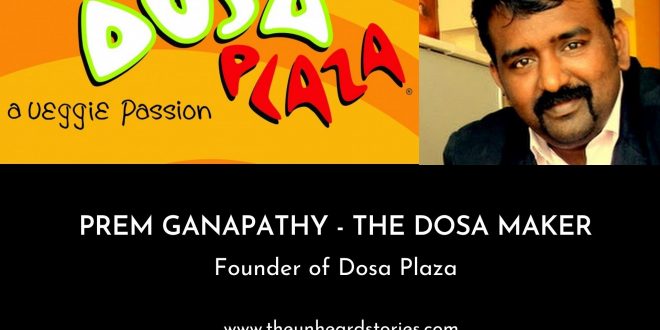 Prem Ganapathy is an entrepreneur and businessman. He owns the restaurant chain Dosa Plaza. With a very small investment in starting, he expanded Plaza into a chain of restaurants without holding any professional degree. Today, there are around 72 outlets of Dosa Plaza in India, New Zealand, and the UAE (United Arab Emirates). Moreover, he received a new brand logo called Dr. D in 2003.

The early life of Prem Ganapathy

He was born in 1973. His birthplace was Nagalapuram in Thoothukudi district in Tamil Nadu. He was from a poor family with 7 brothers and sisters. Somehow Prem Ganapathy completed his 10th grade. He moved to Chennai in search of a job instead of getting higher education. Prem was eager to support his family financially.

Mr. Ganapathy did different jobs when he was in Chennai and he could only earn around 250 rupees per month. He sent all the money back home to help his family. The amount was not enough for them. Therefore, he decided to move to Mumbai in 1990 when he was 17 years old. Prem Ganapathy did not have money; also he was not able to speak the language in Mumbai. Then a Tamil family helped him to get a job in a local bakery at Mahim. He earned only 150 rupees per month from that bakery job.

Start-up of the Business

After working in different restaurants and bakeries, Mr. Ganapathy decided to start his own small business. Firstly, he started with making Dosa and Idli on his hand cart that he rented for 150 rupees. He spent most of his savings to get the utensils, stove, and other products needed for his start-up.

Then after some time, he managed to shift his dosa and idli business to a shop opposite the Vashi train station. The secret of the recipe was the masalas as well as the cooking style from Chennai. Furthermore, the quality and clean environment of the restaurant attracted people to his place.

Prem Ganapathy had a quite spacious place for rent. It was used for preparing masala and ingredients. He is very clear about cleanliness as well as the quality of the shop and the products. His two brothers Murugan and Paramashivan came to Mumbai to help him.

He started saving around rupees 20,000 per month from the shop. He started his own restaurant in 1997.  Prem Ganapathy named the place Prem Sagar Dosa Plaza, Vashi. He had to pay around Rs 50,000. In addition, he used to pay Rs 5000 for monthly rent for the restaurant.

If someone suggested to him something he liked to give it a shot to grow his business. He learned how to use the internet from the college students who visited his restaurant. In addition, he learned some new tricks and techniques from the internet and used them on his signature dishes. After learning from the internet, he managed to produce 26 different dishes for dosa. However, fusion did not stop and currently, Dosa Plaza has around 105 exotic dishes for Dosa.

Expansion of the Plaza

Prem always wished to have his outlet in a shopping mall. In 2003, Prem Ganapathy opened his first franchise outlet at Wonder Mall in Thane. He was very popular among his customers. Then he also supplied the dosa batter with other ingredients.

Now, the Sagar Dosa plaza has franchises outside of Mumbai. There are two shops in Dubai as well as three in New Zealand. Along with it, Prem Ganapathy is opening Dosa plaza in Muscat. In near future, they are also planning to open 15 other restaurants in India.

Prem Ganapathy started this work with Rs 1000. Currently, he owns a company of Rs 30 crores because of his hard work and determination. His net worth has been growing significantly. In 2019-2020, the estimated net worth of Prem Ganapathy including money, salary, income, and assets is between $1 million – $3 million.

He belongs to a poor family but he changed his fate with firm belief. This dosa plaza owner sets an example for other people that dreams can be fulfilled if you have faith in yourself. The Inspiring story of Prem Ganapathy is making the biggest impact on people’s life.