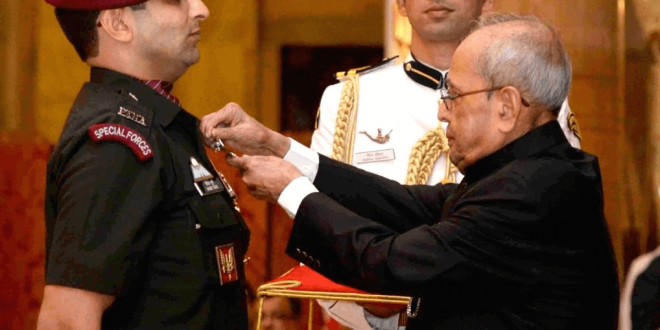 Who is Major Rohit Suri?

Major Rohit Suri was a young age officer at a surgical strike to Jammu and Kashmir. During his duty time, he was at the rank of Major. As he was brilliant with a peaceful mind, so his senior appointed him as the leader of the secret mission to Jammu and Kashmir. Likewise, Major Rohit Suri conducted as the team leader of the 4 Para Special Forces of the Army and killed 4 terrorists with his close comrade. Major Rohit Suri’s biography shows the bravery and awards he got during his duty time.

Who presented this award to Major Suri?

However, the Kirti Chakra award is the part of Indian military decoration awards. This award presents by the honorable president of India. As Major Rohit Suri selected by Major Tango himself to lead the team’s surgical strike, so he planned and orders his team very carefully. He called as the sharp-minded man with gallantry nature.

As Major Rohit Suri considered one of the daring military officers, so he became the part of secret mission among terrorist in 2017. Likewise, his courageous and courtesy behavior marks him a good team leader. By ending the surgical strike of Jammu and Kashmir, Rohit Suri and his militant partner finished the terrorist in close quarter combat.  Due to his mindful planning and bravery to have a close fight with terrorist listed his name for the Kirti Chakra award. Therefore, he awarded with Kirti Chakra honor in 2017 by honable president Mr. Pranab Mukherjee.

Explain the role of Major Rohit Suri in a surgical strike against the terrorist in J&K?

Major Suri was appointed as the team leader of the surgical strike in Jammu and Kashmir in 2017. So, he well-played his role and managed all the special force militants carefully. When the whole comrades under the directions of Maj. Suriwent closer to the zones of the terrorist to hideout them, then arsonist started continuous firing. He just ordered his force to wait for his further orders.

After that, he led the whole team and also had a combat fight with terrorists. He and another comrade went close to the areas of the terrorists. There they did close combat with them and move further in the deep forest. He is willing to his life for his country always. Additionally, Mr. Suri and his whole team unhide the terrorists without losing too many militants. Therefore, he called as the Rohit Suri Kirti Chakra officer in his Parachute regiment.

The Unheard Inspiration story of Major Rohit Suri is making the biggest impact on people’s life.

Ajay Bijli, the man who has proved to be a pioneer for transforming the idea …