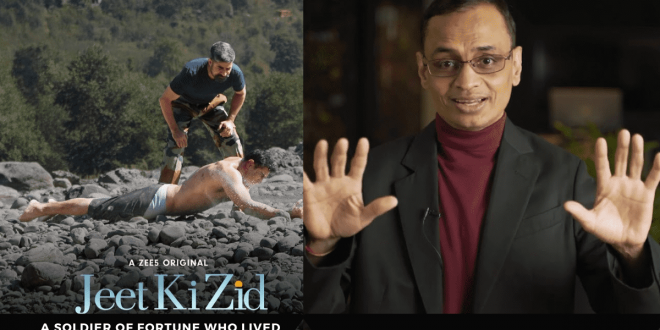 A quick summary of his life

Deependra Singh Sengar is a former Indian Army Officer. He won many wars against death. Doctors even belied that he will never be able to get up from the bed. He was shot with numberless bullets, which injured him seriously. Sengar is currently working for Microsoft and lives in Seattle, Washington, USA. He narrated his story once at the TEDx Talks. The main principle of his life is, “never stop believing”. A web series named ‘Jeet Ki Zid’ is based on his life.

Major Deependra Singh Sengar was born in the city of the state Madhya Pradesh on September 28, 1970, Monday. As of the year 2021, he is approximately 50 years old. His schooling was from Sainik School at Rewa and Graduation from JNU in 1990. He wanted to join Indian Armed Forces since his childhood. Therefore, he joined National Defense Academy.

Sengar joined Indian Army as an officer in the year 1991. Because of his physical injuries, he had to quit the Indian Army in the year 2001. He started his preparations for Common Admission Test while he was recovering from his injuries in the hospital. He took the CAT exam. His result got him a call from over 10 B schools. He achieved his Masters from IIM (Ahmedabad). In 2012, he earned another Masters’s from The University of British Columbia. In 2013 he shifted to the USA.

As an Army officer:

Major Deependra Singh Sengar became an officer in the Indian Armed Forces in 1991. He participated in many gun battles. He also served at Siachen Glaciers. Major Deependra Singh Sengar once led a soldier unit towards Neelam Valley. He captured the Neelam post successfully. Sengar was honored with the Gallantry award for intercepting escaping militants in Assam in the year 1999.

He received about 11 other awards because of his outstanding services in the military. He underwent a lot of injuries throughout the period he served for the military. At Kargil region in 2001, he was majorly injured during a gun-battle. Therefore, he left the army and entered the corporate sector.

As a corporate world worker:

He was not even a computer savvy person till his 30’s. But his potential made him crack the Common Admission Test (CAT), attaining MBA from top level university. He did his Masters in Management from the IIM Ahmedabad. In 2001 he appeared at Laymen brothers as an intern. Later, he served as an associate director at an Indian multinational pharmaceutical company which is popularly known as Dr. Reddy’s Laboratory.

He worked there between the years 2003 and 2005. For the next 5 years, he worked in the different corners of the world at top MNC’s, including GE Capital International Services, TMI, and also in IBN. He then got a job at Microsoft. So far, he is now a Project Manager and is handling Programs regarding Business Strategy.

Major Deependra Singh Sengar have suffered from injuries that were life-threatening twice in his Army Career.

The foremost happened in 1998. While he was in Guwahati, he was leading an escort team. During the operation, he managed to kill 2 militants causing him hit by 2 bullets. The bullets went through his abdomen area and intestine. This injury led him to remain out of action for approximately an annum. Which was less than expected by doctors. Doctors expected it to be around 18 to 24 months. After he recovered, he participated in the Kargil war.

Another incident happened in September 1999. That was unfortunately the end of his Army career. This time he was in a more critical condition than the prior one. He even faced a burst from an Assault Rifle AK-47 while he was in an active anti-terrorist operation in Kashmir. That attack damaged his hip bone. He was admitted to an Army Hospital in Delhi. He had numberless wounds on his entire body.

The Major back in action

Even doctors were not sure about his survival, but he survived. Major Deependra Singh Sengar’s patriotism did not let him down even after being severely injured. As soon as he was conscious, he called the commanding officer to ask him not to appoint anyone else at his position. He was soon back in the action.

The reason behind leaving Armed Forces

Doctors claimed that he will never be able to walk again and will have to spend his life in a wheelchair or with crutches. That was the point when Major Deependra Singh Sengar left the Armed Forces and stepped into the corporate world. He walked using support for further 10 years of his life. But today, jogging and yoga are a part of his monotony.

Ajay Bijli, the man who has proved to be a pioneer for transforming the idea …