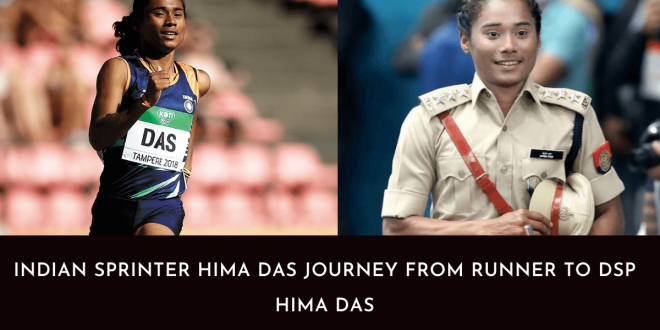 Hima das is also known as “Dhing Express”. She is an Indian athlete. Hima was born on January 9, 2000, in the small town of Assam. She played all the games like football, kabaddi. She also loves working on the farm. Hima attended Dhing Public School and started playing soccer at a young age.

Hima comes from a Dalit family, Hima’s father’s name is Ranjit Das. He did farm work. Hima’s mother’s name is Jamali Das. She is a housewife. There is a total of 16 members in his house. The budgetary situation of this house has always had its own food and beverage system. In the family, besides Hima and her parents, there are 5 brothers and sisters.

When Hima lived in the village due, to the floods, she could not practice for many days because the field in which she used to practice, was flooded with water.

In the year 2017, hima came to Guwahati to participate in a camp, and at their nipun looked that Hima ran very fast even after wearing cheap shoes and from that nipun realized that she was very powerful and could illuminate the Indian name.

One day her Nipun (Hima’s Coach) went to her village to talk with her parents. Nipun said to her parents that they should send hima to Guwahati for practice. But due to budgetary problems, Hima’s parents could not afford her stay in Guwahati. Moreover, they also wanted to see their daughter moving forward.

Nipun said to her parents that they do not worry about money. He bears up all her expenses. thereafter Hima’s parents agreed to send her to Guwahati.

During the first day of training, the stamina of Hima was worth seeing. First, the nipun made Hima prepare for the 200-meter race then after he analyses that she would be perfect for the 400-meter race.

She became India’s first sprinter by winning Gold Medal in the 400-meter race at the “World Under 20 Championship” 2018 also won 2 Gold and 1 Silver medal in Asian Games 2018 in Jakarta Indonesia.

In September 2018 hima received the “Arjuna Award” from the Government of India. And in July 2019, Hima Das owns 5 Gold Medals in just 19 days.

The Success story of Hima das is making the biggest impact on people’s life.

S.P Hinduja is a Britsh Billionaire who is an investor & businessman. He is well-known …