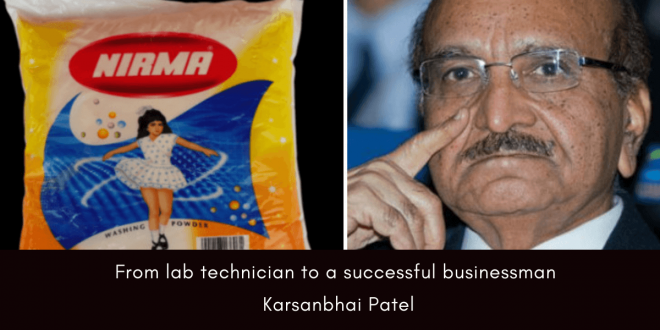 From Lab Technician to a Successful Businessman- Karsanbhai Patel

The brief from past to present- Karsanbhai Patel

The successful businessman Karsanbhai Patel was born into a farmer family at Rupper, Gujarat in1945. Additionally, he worked in a laboratory first in a cotton mill in Ahmadabad. After that, he started a small-scale business of detergent in his backyard. It worked well and Mr. Patel expanded it Ahmadabad’s suburb areas and Maharashtra. Likewise, he named his detergent and soaps after his daughter’s name as Nirma. These soap cakes and detergents occupied about 35% share in the market. Similarly, the owner also expanded his business as Cement, cosmetics, salt, and in the education field too.

As Karsanbhai Patel family hails with agriculture only, but he became a bright student in his higher school. In addition to it, he completed his BSc. at the age of 21. Mr. Karsanbhai then joined New Cotton Mill industry in Ahmadabad. He was employed as a lab technician over there. However, Karsanbahi Patel had a profound understanding of chemicals. Therefore, he joined the Geology and Mining Department of Gujarat in 1969.

Origin of Nirma Company under the name of Karsanbhai Patel daughter

Moreover, Karsanbhai Patel sold his detergent at one- third price from the multinational companies. Likewise, his family helped him in his successful business start and he sold his washing powder at Rs. 3/kg . Furthermore, he has two sons, three daughters and his parents. They all helped him to increase hiss local business at the state level. After three years of reputed job, Mr. Patel quit his job and started to explore his business. Consequently, Karsanbhai opened his first shop in the suburb zone of Ahmadabad. Similarly, the low price of his handmade detergents and soap cakes was a good option for lower to middle- class people. Due to the increasing demand, Karsanbhai Patel opened his other branches in Ahmadabad and Maharashtra too.

The Nirma detergents became the big competitor for the market’s leading companies such as Hindustan Liver, Procter and Gamble, etc. that sold their surf and liquid detergents at Rs, 13/kg and so on. Additionally, Karsanbhai lost his daughter in an accident.

So, he named his detergent and other products Nirma after his daughter Nirupama’s name. As Nirma washing powder contains sulphates, so it also called an eco-friendly cleanser for clothes. The major lipsing lines for advertisement and jingles went viral as “Washing powder Nirma, Sabki Pasand Nirma….”. The local women and females from other zones use these lines to express love for this brand.

The name Nirma became a brand itself in that decade. Similarly, the Nirma brand exploded throughout the whole Gujarat and Maharashtra. Moreover, the ups and downs in the business were also faced by Karsanbhai Patel. Additionally, he succeeds in his business and his sons and son-in-law also joined the same business. As time goes on, Nirma Company flourishes the market and occupied 35% of the total soaps and washing powder.

However, hike in the detergents and soaps sold well, then Mr. Karsanbhai Patel developed cosmetics, cement, edible salt, and shampoos, etc. Several educational foundations are founded by the Nirma partners. The Nirma labs, Nirma University of Science and Technology, etc. are playing well in the educational field at a reasonable fee structure.

Similarly, Nirma memorial trust, foundation, and Chansana Rupper Gram trust also own the Nirma University. Additionally, Patel’s two daughters, two sons, and son-in-law owned chief positions in Nirma Company. Mr. Patel works as retired CEO of the company and discuss and implements advanced and result- given strategies. He won numerous awards from the Indian government and in foreign countries too.

His business also blossoms overseas and this company offers employment to domestic and international people too. Likewise, Karsanbhai Patel has his own 6seater chopper after Pankaj Patel and Gautam Adani. The annual turnover of Nirma Company is calculated as 3.8 million in a recent survey. He was at 30th position in Forbes Magazine as India’s richest person. Furthermore, all his success is due to his strong brainiac strategies and the struggle he did at his young age.

The Inspiring and success story of Karsanbhai Patel is making the biggest impact on people’s life.