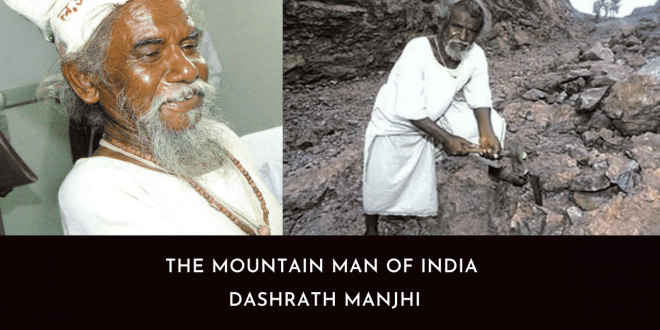 Dashrath Manjhi was born in 1934 in Gehlaur village of Bihar state. In the village, there was no school and shops. People of the village had to cross an entire mountain between the village and the town.

Due to poverty, Dasharatha ran away from home at a young age and started working in the coal mine of Dhanbad.

After working for a few years, he came back to his house and married a girl named Falguni. Falguni wife of Dashrath was taking food for him and suddenly her foot slipped from the mountain. A local village man told Dashrath that his wife had fallen from the mountain.

Dashrath took him to a hospital which was 70 km away from the village and the hospital people told Dashrath that his wife has died.

In remembrance of his beloved wife, Manjhi decided to remove a mountain with the help of a hammer and chisel. He has decided to pave the way so that no one else will suffer as his wife does. Dashrath continued for 22 years, he saw neither day nor night nor winter nor summer. He continues with his work.

The people of the village started making fun of him and the family had also abandoned him. Dashrath removed 25 feet high mountain with the help of a chisel and hammer.

For his achievement, the Bihar government proposed his name for “Padma Shri” in the field of social service and also promised to build a road and hospital in the name of Dashrath Manjhi. In March 2014, the show was run by Aamir Khan “Satyamev Jayate” Season 2 with Dashrath Manjhi.

The Inspiring story of Dashrath Manjhi is making the biggest impact on people’s life.