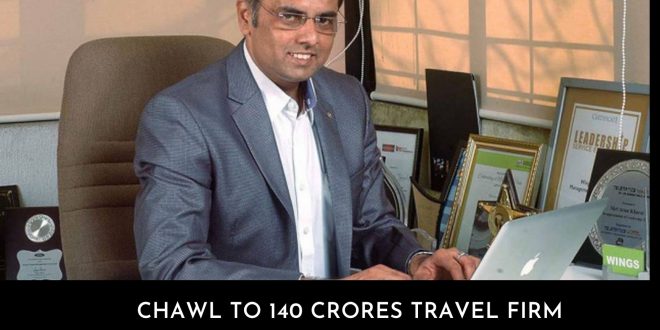 Arun Kharat used to live in a chawl of Pune from his birth. He had a dream to fly with his thoughts. All his dreams came true because of his sheer hard work as well as determination. Arun started with operating a telephone booth, selling tickets. Now, he lives in a posh area of the city. Moreover, Arun Kharat owns a company of 140 crores.

Arun Kharat was born in a lower-middle-class family. They lived in a small chawl in Khadki, Pune in Maharashtra. His father used to work as civilian Health Superintendent at the cantonment board. Arun had very little interest in studying because he was frightened by the medical books of his brother. His brother was studying medical subjects. However, he always had a dream to start his own business.

After completing his 10th from St. Joseph’s Boys School, Pune, Arun started working in a family footwear shop where he helped his uncle. However, his mother did not want him to leave his education in between.

Therefore, Arun continued his study and started his diploma in mechanical engineering rather than doing a degree in engineering. He completed his 3-year diploma from Government Polytechnic College, Pune.

Start-up of his struggle

After completing college, Arun got his first job at Telco, a Tata Group Company. He worked in Telco for nine months. Then after resigning from Telco in 1992, he joined Sudarshan Chemicals as an Engineering purchase officer.Arun Kharat soon had set up an STD booth, where he even sold tickets for a private bus for long routes.

In addition, Arun started to sell railway tickets for commission. In 1993-94 he hired some cars and started his Car rental business. His superiors in Sudarshan chemicals were his first clients. He used to work for around 19 hours. Firstly at Sudarshan chemicals, followed by footwear shop and then in his agency.

In 1995, when he resigned from his job, Arun joined the Institute of Management and Development and Research (IMDR) at Pune for a Business Administration Diploma. While pursuing his post-graduation diploma, he met a fellow student Bharti. Arun Kharat married Bharti. Today, Bharti and Arun act as directors of their company. Arun and Bharti are gifted with two children a son as well as a daughter.

In 1996-97, he bought a second-hand Fiat – as his first car. Then Arun purchased a second-hand ambassador. Mostly government offices used to rent those cars. Therefore, he moved from Pune to Mumbai. He was offered staff transports service by a BPO company named EFunds International. This was the turning point for him.

The second client of Wings Travels was again a BPO company called Track mail. Wings travel by 2001 served 30 companies with a car count of 70 – 80 cars. In the same year, the turnover of the company was around ONE crore.

Today, Arun’s Wings Travels have around 475 cabs and more than 800 cabs under the Malik Chalak scheme. It is a staff transport management company that employs 600 people. Additionally, Arun kharat’s Wings travels nowadays run cabs in nine different cities of India: Mumbai, Pune, Gurgaon, Chennai, Hyderabad, Bengaluru, Chandigarh, Ahmedabad, and Baroda. He has also expanded his cab business in Thailand. In addition, the company has trained around 300 people of the LGBT community to drive private taxis.

Moreover, in Bengaluru, considering the safety of its customers, Arun Kharat has embedded an SOS feature in all the cabs of his company. There is activation on SOS if a passenger panics or screams. The staff sends other cabs nearby to help the passenger.

Arun’s Wings Travels has become a well-known name in the Indian travel industry. Today Arun has an annual turnover of over Rs 140 crores. The capital of wings travel is around Rs. 6,000,000 and its paid-up capital is about Rs.5, 066,260.

He belongs to a low-income family and did not have much interest in studies, but his excellent vision and hard work pave the way to fulfil his dream. He is a true example of a self-made millionaire who touches the sky of success with the wings of determination.The Inspiration story of Arun Kharat is making the biggest impact on people’s life