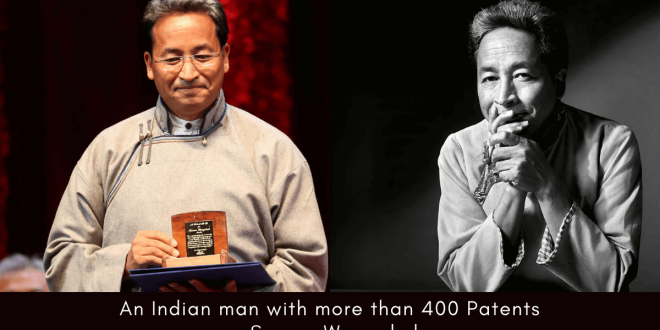 An Indian man with more than 400 Patents – Sonam Wangchuk

Who Is Sonam Wangchuk

Sonam Wangchuk was born on 1 September 1966 in a small village in Ladakh, his village usually had only three families. Wangchuk father was a leader and former minister. His mother taught him all the basics in his native tongue up to that point.

At the age of nine, he sent to Srinagar and admit to a school there. Since he looked different from the other students, he would be targeted in a language he did not understand, so he considered it stupid.

Sonam Wangchuk got an award in Mumbai and he was a big fan of Aamir Khan’s film (Taare Zameen Par). He met Aamir Khan and also gave a suggestion to Aamir Khan about the controversy over Siachen in Ladakh and Baltistan. Spending 5-7 crores rupees of the day on a piece of ice. So, is it possible to convey a message to the audience through a medium of film that the money which they are wasting on a piece of ice that money should be utilized on the education system?

The discussion ended over there. Then in December 2009, Sonam Wangchuk receives a lot of E-mails from journalists. Friends and journalists said to Wangchuk that the film (3 Idiots) has been released about your life is very great.

“Sonam Wangchuk said that they do not want to live in the life of films, this country does not need films, we give more importance to Bollywood and cricket in this country”.

When he came to Ladakh after engineering, Wangchuk started a campaign there. (SECMOL) Student’s Educational and Cultural Movements of Ladakh. The most important thing about school is that in the 10th-grade results, only 5 percent of children used to pass, now 75 percent of the children have started passing. SECMOL won “International Terra Award in 2016”.

Wangchuk made another school (School of Failures) for the rest of the 25% of children who have failed in their exams. It is the special thing of the school that here students do not get admission according to the percentage.

School taught children in different ways. If children don’t study in the way they are telling they taught in the way in which they want to study.

The school has its own newspaper called “Campus Times” its radio station with a special one-hour Indian end time to teach students to sleep and wake up in the morning before the rest of the world sees the sunrise.

Solar-Heated Tent: – Sonam Wangchuk recently invent a solar-heated tent for Indian Army Soldiers. This innovation is developed by his team (HIAL) Himalayan Institute of Alternatives Ladakh.
The tent consists of three main parts, two rooms, and one wall. The first room is for daytime living, while the second one is for sleeping at night when the outside temperature drops dramatically.
Sonam said that the inside temperature of the tent was 15° Celsius according to the outside temperature of the tent i.e is -14° Celsius.

Padma Angmo is the wife of Sonam Wangchuk.

The Success story of Sonam Wangchuk is making the biggest impact on people’s life.